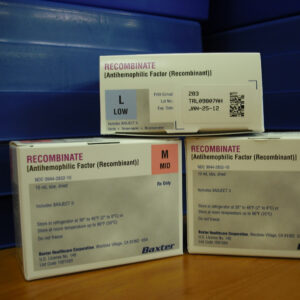 The use of RECOMBINATE [Antihemophilic Factor (Recombinant)] is indicated in hemophilia A (classical hemophilia) for the prevention and control of hemorrhagic episodes.2 RECOMBINATE is also indicated in the perioperative management of patients with hemophilia A (classical hemophilia). RECOMBINATE can be of therapeutic value in patients with acquired Factor VIII inhibitors not exceeding 10 Bethesda Units per mL.3 In clinical studies with RECOMBINATE, patients with inhibitors who were entered into the previously treated patient trial and those previously untreated children who have developed inhibitor activity on study, showed clinical hemostatic response when the titer of inhibitor was less than 10 Bethesda Units per mL. However, in such uses, the dosage of RECOMBINATE should be controlled by frequent laboratory determinations of circulating Factor VIII levels as well as the clinical status of the patient.

RECOMBINATE is not indicated in von Willebrand’s disease.

RECOMBINATE can be refrigerated [2° – 8°C (36° – 46°F)] or stored at room temperature, not to exceed 30°C (86°F). Avoid freezing to prevent damage to the diluent vial. Do not use beyond the expiration date printed on the box.