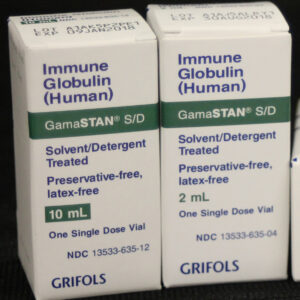 Hepatitis A
The prophylactic value of GamaSTAN S/D is greatest when given before or soon after exposure to hepatitis A. GamaSTAN S/D is not indicated in persons with clinical manifestations of hepatitis A or in those exposed more than 2 weeks previously.

Measles (Rubeola)
To prevent or modify measles give GamaSTAN S/D in a susceptible person exposed fewer than 6 days previously.(7) A susceptible person is one who has not been vaccinated and has not had measles previously. GamaSTAN S/D may be especially indicated for susceptible household contacts of measles patients, particularly contacts under 1 year of age, for whom the risk of complications is highest.(7) GamaSTAN S/D and measles vaccine should not be given at the same time.(7) If a child is older than 12 months and has received GamaSTAN S/D, he should be given measles vaccine about 3 months later when the measles antibody titer will have disappeared. If a susceptible child exposed to measles is immunocompromised, GamaSTAN S/D should be given immediately.(8)

Do not administer measles vaccine or any other live viral vaccine to children who are immunocompromised.