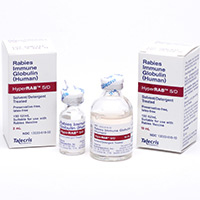 Rabies vaccine and HyperRAB S/D should be given to all persons suspected of exposure to rabies with one exception: persons who have been previously immunized with rabies vaccine and have a confirmed adequate rabies antibody titer should receive only vaccine. HyperRAB S/D should be administered as promptly as possible after exposure, but can be administered up to the eighth day after the first dose of vaccine is given. Recommendations for use of passive and active immunization after exposure to an animal suspected of having rabies have been detailed by the U.S. Public Health Service Advisory Committee on Immunization Practices (ACIP).19

Every exposure to possible rabies infection must be individually evaluated. The following factors should be considered before specific antirabies treatment is initiated:

1. Species of Biting Animal
Carnivorous wild animals (especially skunks, foxes, coyotes, raccoons, and bobcats) and bats are the animals most commonly infected with rabies and have caused most of the indigenous cases of human rabies in the United States since 1960.20 Unless the animal is tested and shown not to be rabid, postexposure prophylaxis should be initiated upon bite or nonbite exposure to these animals (see item 3 below). If treatment has been initiated and subsequent testing in a competent laboratory shows the exposing animal is not rabid, treatment can be discontinued.

In the United States, the likelihood that a domestic dog or cat is infected with rabies varies from region to region; hence, the need for postexposure prophylaxis also varies. However, in most of Asia and all of Africa and Latin America, the dog remains the major source of human exposure; exposures to dogs in such countries represent a special threat. Travelers to those countries should be aware that 50% of the rabies cases among humans in the United States result from exposure to dogs outside the United States.

Rodents (such as squirrels, hamsters, guinea pigs, gerbils, chipmunks, rats, and mice) and lagomorphs (including rabbits and hares) are rarely found to be infected with rabies and have not been known to cause human rabies in the United States. However, from 1971 through 1988, woodchucks accounted for 70% of the 179 cases of rabies among rodents reported to CDC.21 In these cases, the state or local health department should be consulted before a decision is made to initiate postexposure antirabies prophylaxis.

2. Circumstances of Biting Incident
An unprovoked attack is more likely to mean that the animal is rabid. (Bites during attempts to feed or handle an apparently healthy animal may generally be regarded as provoked.)

3. Type of Exposure
Rabies is transmitted only when the virus is introduced into open cuts or wounds in skin or mucous membranes. If there has been no exposure (as described in this section), postexposure treatment is not necessary. Thus, the likelihood that rabies infection will result from exposure to a rabid animal varies with the nature and extent of the exposure. Two categories of exposure should be considered:

Bite: any penetration of the skin by teeth. Bites to the face and hands carry the highest risk, but the site of the bite should not influence the decision to begin treatment.22 Bat-associated strains of rabies can be transmitted to humans either directly through a bat’s bite or indirectly through the bite of an animal previously infected by a bat. Because some bat bites may be less severe, and can go completely undetected, unlike bites inflicted by larger animals, especially mammalian carnivores, rabies postexposure treatment should be considered for any physical contact with bats when bite or mucous membrane contact cannot be excluded.23

Nonbite: scratches, abrasions, open wounds or mucous membranes contaminated with saliva or any potentially infectious material, such as brain tissue, from a rabid animal constitute nonbite exposures. If the material containing the virus is dry, the virus can be considered noninfectious. Casual contact, such as petting a rabid animal and contact with the blood, urine, or feces (e.g., guano) of a rabid animal, does not constitute an exposure and is not an indication for prophylaxis. Instances of airborne rabies have been reported rarely. Adherence to respiratory precautions will minimize the risk of airborne exposure.24

The only documented cases of rabies from human-to-human transmission have occurred in patients who received corneas transplanted from persons who died of rabies undiagnosed at the time of death. Stringent guidelines for acceptance of donor corneas have reduced this risk. Bite and nonbite exposures from humans with rabies theoretically could transmit rabies, although no cases of rabies acquired this way have been documented.

4. Vaccination Status of Biting Animal
A properly immunized animal has only a minimal chance of developing rabies and transmitting the virus.

5. Presence of Rabies in Region
If adequate laboratory and field records indicate that there is no rabies infection in a domestic species within a given region, local health officials are justified in considering this in making recommendations on antirabies treatment following a bite by that particular species. Such officials should be consulted for current interpretations.

HyperRAB S/D should be stored under refrigeration (2–8°C, 36–46°F). Solution that has been frozen should not be used.